Queuing is a very British thing; we seem to queue for everything and anything, it’s part of our culture.  I think that it’s a natural process inside us all, a little like a baby bird who just knows what to do once out of the egg.  I realise that human babies don’t queue but I suspect they would if they could for their milk. 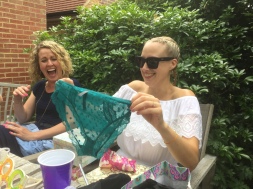 Knickers to you madam.

Queuing is what we do, it a national past time along with complaining about the weather.  It’s only a matter of time before it becomes an Olympic sport which we would win every single medal available.  Our “Queuing Team” would be the best in the world, at least there is little chance of a doping scandal and if there was then we would be really screwed. 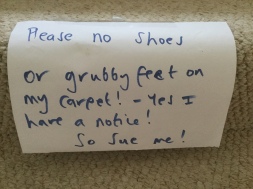 Scroll through the hundreds of TV channels available you will see programmes about every topic.  It won’t be long until there is a programme about queuing, it would appear on a channel about three quarters of the way down the listings near the adult ones.  The programme could be called “Brits who love to queue” this would lead to a second series “Brits who want to keep queuing”.  As with everything on TV these days there would be a celebrity version featuring washed up z-list celebs and reality TV zombies.

Me before and after the Hen Do…. I was broken.

I was once in Canada travelling on the Trans Canadian railway for 5 days from Toronto to Vancouver (and back again).  I remember walking in to the buffet car behind a women, I asked if this was the queue.  She looked at me with a puzzled frown.  In Canada they didn’t use the word queue, I had to think quickly and say “line” (of course I’m not saying they don’t use the word it was just that person who really didn’t know it).

Quite normal Hen behaviour I believe.

Some of the worst queuing happens around public transport, when a train arrives the queue scatters and all etiquette goes out of the window as people crowd around the doors.  This causes a problem as people who are trying to get off have to squeeze through the idiots attempting to climb on at the same time.  I really want to tap them on the shoulder and say that they would get on the train quicker if they stayed in the queue and let everyone off first.  But if I did that I would probably get a black eye or worse.  Yes its times like this I get “Queue Rage”.

This week I learned to make Vodka Jellies…

Last weekend it was my sister’s Hen Do (more on that soon).  Once MOZ and I arrived at Victoria station our hearts sank when we saw the queue snaking round and round a roped off area but everyone was queuing waiting their turn.  However as we got very close to the front a tall thin pretty woman climbed under the barrier, she mesmerised a man with her smile and walked up to a free counter.  Everyone was being very English; and didn’t say a word, however everyone was suffering from “Queue Rage”.  In conclusion, if you don’t want to queue just smile sexily at a man and you will jump to the front of the queue.

And now for something completely different….. 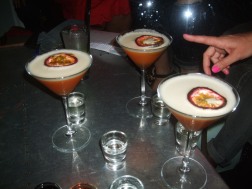 All of us squeezed in to the VIP area in the local club, I enjoyed the Cocktails.

As previously mentioned it was my sisters Hen Do last weekend, a lovely chance to meet old friends and make new ones.  I’ve never been on a Hen night before, I can report that there were straws in the shape of willies, hen sashes (my sister wouldn’t wear them) and a huge inflatable penis in the garden.  The drink flowed (our Vodka jelly shots went down well), laughter could be heard all around the house. Many of us had facials, massages and our hair braided.  In the evening we were V.I.P’s (I’ve never been a V.I.P) in a small local club, I have a feeling that the roped off area is normally the drag queen stage it was tiny and in the corner.  The wine was terrible, they could have served vinegar which would have tasted better, however I did like the cocktails.  Didn’t go to bed spent the night wrapped in a blanket chatting and listening to the birds waking up.  It really was a lovely way to celebrate my sisters up and coming wedding.  There are two highlights. On Sunday morning MOZ was trying to deflate the large inflatable penis by leaning on it, she fell off.  Then bumping in to my cousin and a friend at the train station, they were on the wrong platform.  I couldn’t let them go to Reading could I. 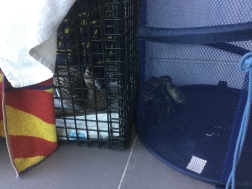 Searching for Duckling on the 5th floor, mum and 8 babies all safe and sound.

On the hottest day of the year, there was a Duck and 9 Ducklings wondering around the roof garden at work.  We called in a man who spent a number of hours trying to catch them.  Mum and 8 of the ducklings were captured quite easily, but there’s always one troublemaker in any group, number 9 hide in the tall grass and wouldn’t come out.  But the duckling wasn’t as clever as he though and was caught when mum made a noise calling for the lost baby.  They have been rehomed in a local park with lots of water.  The roof garden is a wild place so it was a safe place for mum to nest and incubate her eggs, but being on the 5th floor it’s really not a great place for ducklings. 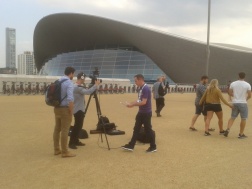 Stratford was busy on Friday evening, luckily I was going to the pool away from the crowds.