I want to talk about “Manspreading”. A phenomenon that you see more and more here in the UK, I know people are getting bigger round the waist and you would think that this is the reason for Manspreading.  But I don’t think that’s true. I get the impression that when men are travelling daily on the tube, train, bus or tram they feel the need to spread out as much as possible. They need to sit taking up as much space as they can. I like to think there trying to show there superiority. The man with the wider spread is the alpha male. I don’t know this for sure but I suspect there all trying to outdo each other.

I wonder if they have to sit like that, maybe if they have their legs closed they become weaker (a little like Samson after his hair is cut).  Of course there could be science involved, maybe it’s all to do with air flow (that conjures an imagine of men in wind tunnels having jets of air blasted at them while white coated scientist stroke their chins in agreement).  Maybe the lack of air flowing to the “Man jewels” (a scientific term) could have an effect on their masculinity.  Could it be that there is less “Man fizzing” in that area if they don’t spread out, the bigger the fizz the more excitement they feel rushing through there veins.  Then again I could be completely wrong, it might just be the way they have learned to sit. 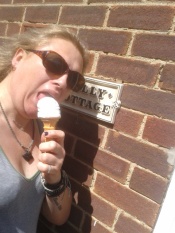 This week I was recently squashed between two men early morning on the train, both appeared to be spreading as much as possible. I sat there in between them in a space that seemed to be getting smaller with each station that the train stopped at. Of course I didn’t want to accidently intrude in to their space which meant I had to keep shuffle my bags around on my lap and on the floor. The most important thing was I didn’t get in the way of their spread off. If they were they trying to impress me, they were barking up the wrong tree.

Everywhere you look in this modern age, Manspreading would seem to be a real problem on public transport. Transport operators are trying to squeeze more and more people on to their services and you have men trying to take up as much space as possible. I think this is the start of a fight back. The sisters need to rise up and push those manly hairy knees back together to allow everyone the same amount of space on their daily journey in cattle class.

Enjoying champagne with Catherine and SAZ.

And now for something different…..

Monday morning I was so tired (after a lovely weekend “up north getting my hair cut and seeing mum). I spent the whole morning feeling totally worn out.  There were times when I realised that I was just staring blankly at my computer which normally stares blankly at me. I honestly could have just fallen asleep even with the noise of the office around me.

Spotted a random tattoo of the week (And you think mine are bad).

I decided to have a nap at lunchtime, but where.  I didn’t want to rest my head on my desk , I couldn’t go up to the canteen because there were people trying to eat their lunch and the last thing they needed was a mad fat woman snoring on the corner. 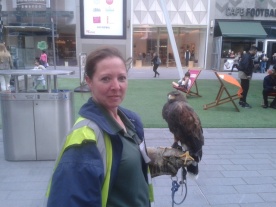 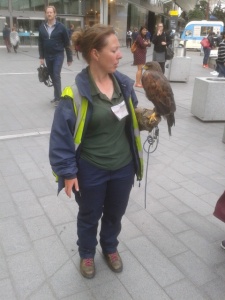 Spotted at Westfield this week a pretty bird.  The Hawk wasn’t bad either.

I work on the 5th floor of a 12 floor building?  The office looks directly out on to a roof garden.  There is no pretty lawn with colourful flowers; it’s a wild haven, an untended place that bees, butterfly’s and other small creatures enjoy.  Larger visitors such as pigeons and seagulls also enjoy this man made patch of wilderness above sea level.  It might not be pretty and would never win an award at the Chelsea flower show but I really like it. That lunchtime nap did me the world of good, I sat on the bench with my eyes closed while listening to a funny podcast and had a snooze. I think I should do this more often, remembering to set an alarm just in case. I’m not sure that my managers would be impressed if I overslept.

In Rochester for Racs Bday.

Trying to spot the Red Arrows a number of miles away with limited view in between houses at the end of my mums road while my 4 year old niece sat on my shoulders.  A colleague singing Queen “find me somebody to love” before 9am.  Trying to turn my vest top around in public after swimming (I had it on backwards). Visited Rochester with MOZ and Rachel (it was Racs bday) we saw a couple of mobility scooters pass by. On the back of these was written “Beauty” the other had “Beast”.

Recreating the end credits of The Bill.