At the end of last week I had a call from a temp agency about a possible job working for a London Borough in the Revenues department, this is work that I used to do in a different part of the capital. I admit it’s not what I want to do but if it means I can save money so that I can return to Tofo and continue the mid-life crisis then so be it.

One of us has a nickname of “Fat face”….

Monday this week I had to go to the Job Centre early in the morning I was really hoping that I would hear more about the job before the interview, I didn’t. Just looking at the faces of the Jobcentre staff you can tell that they have been here for years and really don’t enjoy their job, but a jobs a job (so they say). I also had to attend a Habitual Residency Test (HRT) in order to ensure that I have a right to be in the country. I was ready to answer questions such as “Who is the Prime Minister” the answer Jezza Clarkson, “Who is the Monarch” the answer Julie Walters. These questions didn’t come up, it’s just like being at school all over again preparing for a test and everything that you hoped would come up didn’t. Instead there were questions such as “Did the Mozambique authorities know that I have left the country”, “Why had I come to the UK”. The problem with the HRT is that it’s really for people coming in to the country for the first time or people that haven’t lived in the UK for a long time. The woman behind the counter actually kept apologising for the stupidity of the questions, you also could tell that she knew these off by heart she really didn’t need to read from her screen.

The Job centre staff weren’t impressed that I intended to go and visit my mum on Tuesday, well I haven’t seen her in 9 months.

Mum had only just woken up when ambushed her with the camera.

Once out of the job centre clutching all the pieces of low quality cheap photocopying paper with badly printed information about making a claim and what I need to do before my first signing session later in the week. 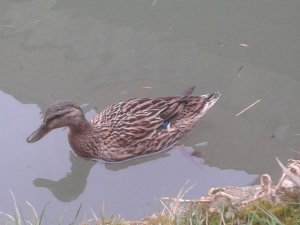 I am my worst enemy; I have a constant fight against feeling depressed and low. Most of the time it’s just my mind mulling everything over, the more I mull the worse everything appears. I have to remember that I have done things that others dream of. I need to remind myself of the amazing Manta, Whale Shark, Turtle experiences I had in Mozzibeak. The wonderful smiling people I met. Its memories like that I need to think about to bring me out of the pit of darkness I visit often.

Taken while walking in the rain along the Grand Union Canal.

Once home I thought I better do some job hunting (none of the applications forms or CV’s handed in last week have developed in to anything). I quickly found a job in Gatwick with a car hire firm, while quickly adjusting my CV to fit the application the phone rang. The curtain of darkness suddenly lifted, yes I can be a drama queen at times and during the day I was an Oscar winning one. This is because I have learned to not expect good things to happen, I’m not a lucky person if I want something I have to work damn hard I don’t get things given to me on a plate. However when that phone rang it appears that I have been given not just a plate but an entire platter of an opportunity.

Working in an office again will be strange, having to dress up, put a little make up here and there. Getting to know new people is always scary. But as I have said before I only have to do this for a short time, there is light at the end of the tunnel.

Anaia my niece drew this picture of me.

It’s been a good week. Got the car running (with the help of the recovery man), drove to mums, started running after months of resting (had a nice walk along the Grand Union Canal). I got to spend lot of quality time with my nephew and niece. High light of the week was spending time with my best friend MOZ, we might have only gone to Lakeside shopping centre but it made me happy.

No this is not from Lord of the Rings, I watched the eclipse on TV,  it was far to cloudy here,  but still stunning.

Next week a new chapter of the Mid-Life Crisis starts…..