This week I have mainly been listening to: “The Cranberries”, The Sundays”, “Sixpence non the richer”, Morrissey, On Xfm, “The Wombats”, “The White Stripes”, “Blur”.

Not sure who’s having more fun.

This week I have been getting used to hearing “All Change”, “Mind the gap between the train and the platform” and everybody’s favourite “The next train is cancelled”. That’s right I have become a commuter again. Every morning I get the same train, stand (if I ‘m lucky I get a seat) in the same place, reread the emergency information by the doors again which I will know it by heart soon. I see the same faces all looking down at small illuminated screens. Now and then you see someone going retro reading a book, that’s right paper pages with words printed on them bound together so it can be held and read. Sitting amongst the rest of the 21st century they do look a little out of place but it’s also refreshingly pleasing.

In 5 days I have become a regular, the woman behind the glass at the train station booking office has commented on this and says hello. The man I get my free paper from in the evening smiles and says hello. I am officially part of the rat race.

I used to get up at the same time and walk to the dive shop in Mozziebeak, but it felt totally different much more relaxed less regimented. There was never the feeling of being stuck in a daily rut. Also the lack of small illuminated screens was noticeable, this meant that people would say hello, wave and shock horror smile. Look around the 7.40 to London Victoria and that’s one thing you will never see, a smile. If you did see a smile you would wonder what’s wrong with them it’s so out of place. I travel to my new job in my own cocoon standing (or sitting now and then) in my own space and god forbid anyone entering it, or knocking me. I might have only been doing this 5 days but I can give the perpetrator a stare that says back off mush. I think were breed to have this commuter instinct; it’s been years since I travelled daily like this but I haven’t forgotten how to do it. I stand (or sit if I’m lucky) and wonder who these people I see daily are what they do and what they are like.

My job is in a shiny new glass and metal building, which is a monstrosity, it’s ugly but it’s going to help me save money. I work in a huge open plan office, with lots of people sitting in rows all looking at illuminated screens. I spent my day looking at one of these screens talking on the phone; by the end of the day I am totally sick of hearing my own voice. I have started to speak to a few people in the office but of course there peeled to the technology in front of them all trying to earn a few pounds to survive. For them this is a career, for me it’s a means to get back to Mozziebeak but they don’t need to know that. I can’t see that I will be getting to know anyone in the office; they will just be faces and voices I hear for 8 hours a day. I miss the family atmosphere of the dive shop, it really is a family everyone knew each other and cared for each other. I stare out of the window and look at the skyscrapers being erected over Croydon, one of them I can see visible changes every day, I will look back at that building in the future and remember that I saw sections of it actually being put in place. While staring out of the window watching the clouds, I remember the clouds on the boat speeding to a dive site, its thoughts like that which are going to get me through the next few months. 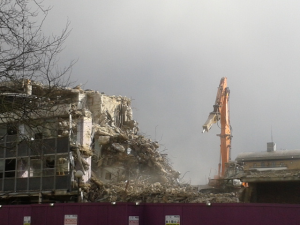 I spend my lunch time watching diggers that look like dinosaurs chomp on the concrete, twisted metal and glass of the old Council building as they demolish it. I feed the stumpy footed pigeons while distracting the other more greedy ones with something else. I always feel sorry for the ones missing toes or feet in general, there my lunchtime pals.

It’s been a very busy week getting used to new practices and process and computer systems with lots of passwords. The car failed its MoT so he will have to go (R.I.P Gimli 3). Mum (Grandma) has been down which has been lovely, it has resulted in me having to sleep in my niece’s room. I creep in and out trying not to wake a 3 year old; who warned me not to snore so far I have got away with it. I also went in to London and saw the Rocky Horror Show on the biggest screen in the UK, first time I have seen it at the cinema in 20 years I think (I used to go dressed up, but now I’m a boring old commuter I’ll leave all that to the young people around me).

At the BFI IMAX Waterloo.

It has been a good week, just got to keep reminding myself why I’m here and doing this.