Posted on September 2, 2016 by misfitscully

Misfits Mid-Life Crisis Adventures in East London, and Croydon (The NEXT Chapter). 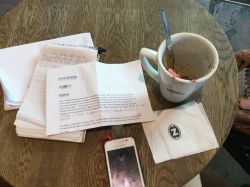 A nice way to spend a Thursday morning.

This week’s blog was mainly written in Café Nero Reigate, after I had taken my nephew and niece to nursery.  After I had popped in to the local Sci-fi shop and bought a few old “Doctor Who” novels (I used to have the entire collection but that’s for another time).  After all of this I finally found myself in the coffee shop writing this rubbish.  Why do I mention this because this all took place on a Thursday morning?  A time I would normally be found sitting behind a desk in an office.  This week was the end of another chapter of my mid-life crisis. 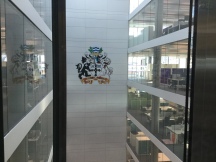 I called the 5th floor home until the middle of this week.

Since I returned from Africa in March I have been working in an office in Croydon.  The same one as I worked in last year, this meant there were no shocks when I walked in and remembered that it was a call centre.  This is a problem as I really hate telephones; I would actually go as far to say that I suffer from “telephonophobia”.  Maybe I should explain, in real life I hardly use the phone as a phone I would rather use smoke signals than speak in to the mouthpiece.  My problem is I sound so terrible over the phone and often get called the “wrong thing” (gender) which I won’t lie always hurts.  I freely admit to flicking the “V’s”, or muting the call and calling whoever is on the line something unpleasant.  I have really hated the last few months, there have been a number of times when I have really wanted to put the phone down pick up my bag and walk out never to return.  But I was brought back to reality by the colleagues around me and realising that I needed to earn a crust.

These people kept me sane over the recent months.

Of course I realise that most jobs are stressful.  However I can only talk about the one I have been doing, which was very statistic driven we were expected to do a certain number of contacts (phone calls, letters/emails) per day, I actually thought it was 36 but recently I found out it was 40.  Every time I did a phone call or worked on an email I pressed a button which started a timer so that when I had completed the enquiry I knew how long it had taken.  I did cherry pick e-mails and letters to work on, this was because in the back of my mind I knew this ticking time bomb was counting the passing seconds and I didn’t want to get pulled up over the amount of work I had finished at the end of the day.  There were only a couple of occasions that it was mentioned by management that I had either not completed the required amount of work or my calls were taking too long. 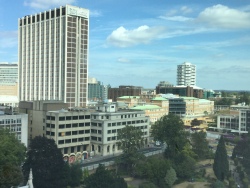 The metroplis that is Croydon.

As I mentioned earlier it was only because of the lovely people around me that I managed to stay the course.  I look forward to keeping in touch with Eileen, Jo, Mary, Jill, Colin and the lovely Rogers.  These people are really the only reason I kept my cool.  I never want to work in revenues again or a call centre ever again.

The board of doom, informing us of how many angry people were waiting.

During my last day I didn’t care about the ticking clock or whether I had done the amount of work that was required.  In a strange way I enjoyed my day in fact at 4pm I was not in a rush to race out of the office as I normally did.  I did confuse a couple of people by the fact that I was still there at 4.01pm.

Fun on the South bank, a little culture by the Thames.

Writing this while drinking a slightly expensive bucket of coffee in Surrey I have no idea what the next chapter of this Mid-Life Crisis has in store.  The first thing is to look for a job, in a perfect world I would love to be doing something creative.  But there is no such thing as a perfect world; I know my future is either in another office or a shop.  The creative side of me will never amount to anything I suspect, I will always be a frustrated, writer, comedian, painter, actor.  Whatever happens I have to remember the real goal, I want to return to Mozambique in January 2017.

L to R, Josienne Clarke & Ben Walker, The Craze sound checking, then suited and booted for the performance.

Walking around Richmond on a sunny day with MOZ, I pointed out a shop and said “Muriel’s Kitchen that was a good film”.  MOZ looked at me disapprovingly and said while continuing to walk “That was Muriel’s Wedding”. 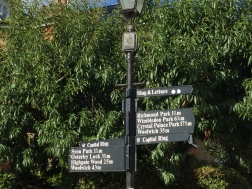 Richmond on a sunny Sunday afternoon.

On a train a group of college boys were sitting talking about “boobs”, “girls” and “drinking”, I was sitting near them with headphones on.  Suddenly one squealed like a girl because of a flying insect as he jumped up to escape the menace.  This group might think they live a “Skins” life but they wouldn’t have made to the end of episode one. 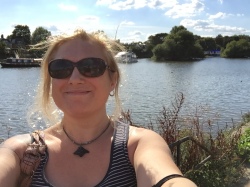