Everywhere you look there are people that are good at things, people who are talented.  I like to walk through St Pancreas station dodging people with suitcases who have just got off the Eurostar who are intent on snagging your ankles with their cases as they pass.  While walking through the station I like to watch and listen to people playing the piano. 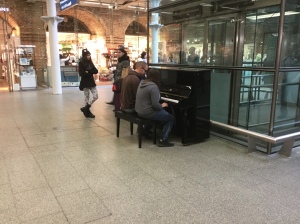 Dotted all through the station are pianos that anyone can use, it’s always better when the person can play of course.  Making a lovely noise out of an inanimate object is a talent.  Last year I heard a guy playing the theme from Mission Impossible I was in a book shop at the time, I just stopped and listened.

Go on have a tinkle at St P’s…

Dancing, singing, play an instrument, being able to plumbing in your own taps or wire your electrics are all talents. Even a dancing dog on TV is talented (No I don’t watch those kinds of progs but I have heard there are talented pooches out there).  I think deep down I am a little envious of anyone with a talent, yes even possibly jealous of dancing animals that entertain millions.

Have you ever written your name on a cushion, I have.

I can draw and paint a little, I can scuba dive but none of these I would call a talent.  I can tell you all about Council Tax legislation but I try to only use this information between Monday to Friday from 9am to 5pm. The rest of the time I try to vent all that knowledge out of my head.  When I was in Mozziebeak I completely forget about Council Tax, the scary thing is how easily the information returned once I start working in an office again.  I am sure there is a saying somewhere “once a revenues officer always a revenues officer”. 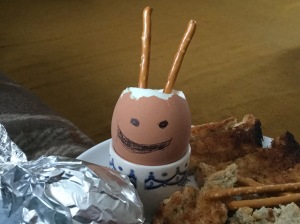 One of these is my best friend since 1980, the other was an evening meal.

I have a geeky knowledge about Doctor Who and other sci-fi TV and films but this will never help me through life.  There is nothing talented about knowing which planet a creature came from or how the Doctor managed to save an entire civilisation with just a toothpick and an old holey shoe.  I suppose I could win Mastermind but that’s not going to improve mine or anyone else’s life, anyway I think all you win a large ugly glass thing which will only gather dust. 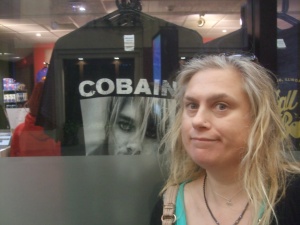 I met Kurt this week.

Creative people give up a lot to be successful and of course only a small number of all those actually go on to big things.  I would like to think that the others know that they bring a smile to people’s faces which can lift a person’s heart by them demonstrating their talent.

The weather was very windy, but I bet the view over the O2 was still impressive.

Something I enjoy is swimming, but thats not a talent.  I love being in the water in fact since I returned from Mozziebeak I have not been near water (as in swimming, I mean).  I made a decision this week that I would start to swim regularly again.  I have wanted to for a while but really couldn’t face the local Council pool. Last weekend I visited the Olympic park in East London which of course has a large pool; I don’t know why I didn’t think of that before.  Even though I paid a lot in taxes to contribute to it being built I still have to pay to get in, but if I get to exercise and feel a little less stressed then it’s worth it.  I’m planning on going 2 to 3 times a week; I also need to lose a few pounds for my sister’s wedding in August so I am hoping this will help.  I know that swimming is a talent for champions but for a lardy arse like me it’s just something to do to relieve the pressure of everyday life especially Monday to Friday work life. 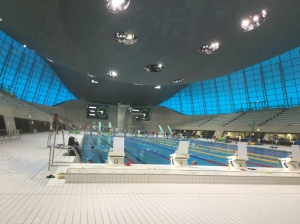 Still a little wet after my swim in Stratford after work.

In other news Happy bday to my brother on 29th May.  Saw girls in what appeared to be school uniform buying fags in a famous newsagent.  Some people still have smoking breaks in this day and age; I might have to restart to see if I can have them as well. Helped a very drunk old man that had fallen in the road with his trousers round his ankles carrying a bag of chips, Thomas was in a state but didn’t want help. As well as MOZ and I helping him a woman called Nicky who happened to work for the Police stopped.  Nicky walk with him down the road just to make sure he was ok. Saw a man in Croydon wearing a very large and shiny chain around his neck, he was either the major or a old fat rapper.