A lovely woman who works in my office has been away for a number of weeks so she didn’t know I had returned.  It wasn’t just me who came back last week, another woman who worked in the office last year has also returned from Australia.  Anyway the colleague who came back from holiday walked in and saw the both of us and said “hello” as if she had seen us a few weeks ago.  This type of office has a lot of people that come and go and return (in my case, like a bad smell). 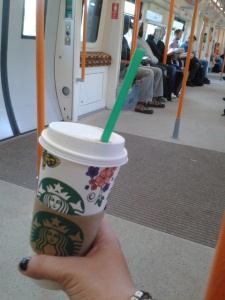 A cuppa in the morning.

Each time I have returned to Tofo Mozziebeak, nothing really changes the sea continues to roll in and out, the market continue to sell everything and anything. I bump in to people who I haven’t seen for months but they greet me like they had seen me yesterday, of course they ask how long has it’s been and how was my time away, but it’s as if I had never been away I’m like a boomerang. It’s such a lovely feeling walking around a small fishing village, a place I know well and realise so many people remember me, they might not know me well but they know my fat face. 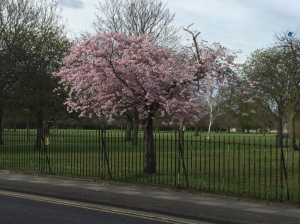 Better weather is on the way this tree is a reminder each day.

I have a couple of friends in the UK that I haven’t actually seen in years but we are in contact on social media and e-mail, we chat and pick things up straight away.  I suspect that when we do meet the same thing will happen there won’t be any need for awkward small talk.

Its not a quiet zone with all the telephone conversations and terrible ring tones sounding off.

Travelling to work I take a combination of 2 trains and 2 tubes, sounds a lot but when everything runs well there is very little standing around time between trains.  I am starting to remember faces on the platforms and trains.  As with many people I stand or sit in roughly the same place every day.  You never know in a few weeks people might start smiling back at me, yes I like to smile at people, I probably look simple to them.  I have to get used to the fact that people in London don’t smile at strangers unlike in Mozziebeak.  But at the moment people just have a sneaky look around then quickly return there gaze to their small illuminated handheld device.

This bear lives in the office, a reminder to meet targets I think and what might happen if I don’t.

The office I am working in has pretty much all the same faces as last year.  It got me thinking that they spend more time together than they do with their families, which is a worrying thought.   The office is huge I know names of many of the faces staring blankly at computers, but I don’t have any dealings with them apart from passing them walking in and out twice a day.  There are a group of colleagues that I do speak to who are so nice, I like to think we help each other get through the day. We work hard, but have a little laugh as well now and then.  Even more reason to try and be happy in what you do and get on with the people you spend most of your day with.

One of the last days wearing a coat till next winter.

One of my best selfies I think.

An old man with a couple of teeth stopped me in the supermarket and asked if had a boyfriend, MOZ said I should have accepted he might have been a millionaire.  I feel so tired on the train, in fact looking around everyone is tired in the morning, I really can imagine the entire carriage falling asleep and missing there stops.  Monday morning couldn’t get in to computer had to call help desk… what a way to start the week.  I can tell it’s getting warmer as I had to take off my coat even when it was raining; I’m always dressed for summer.

Not impressed with this when going home in the rain.