This has been a week of mixed emotions, I also don’t have a huge amount to say (yes everyone cheers at reading that).

I start a job next Monday in Croydon (South London) in the same office I worked in for a few months last summer. And will be working with a number of people that I got to know last year who I am looking forward to seeing them again.

I suspect that 99.9% of people don’t enjoy what they do for a living, the ones that do are probably famous actors or scuba diving instructors. The rest of us have to do a job we hate just to survive. When sitting in a large glass building on the 5th floor next week I have to remember why I am doing the job. I have to remember that I am saving money so that I can return to Tofo in August. It will not be easy being tied to a desk answering phones talking to angry people who really do not want to be talk to me, or listening to what I have to say. 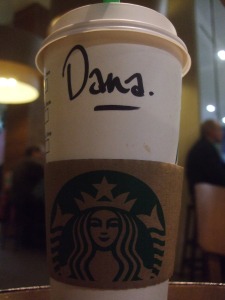 MOZ enjoying a bucket of sugary gloop. I like the writing of my name by the barista.

Last year I found the job tough even though I have been doing it for over a decade. There were moments when I wanted to run away, scream hide in the loo and just escape from the large glass prison I was trapped in. The job is mainly phone based; I don’t even use the phone in real life I’m a texter. I know how bad I sound on the phone, I hate having to defend who and what I am. I get upset when the wrong pronoun is used, and even more upset when a person keeps using them after I have corrected them.

This year I must try to not get stressed, I have to remember that the person I am speaking to will never know me. It doesn’t matter what they think or say, I have to take a deep breath and remember why I’m sitting in a badly air conditioned office. I will think of Tofo and all the lovely people and beach dogs that I know and think about seeing them when I return. In tough times I will fondle the Manta necklace that was made especially for me out of a piece of coconut shell. I just have to remember that I am prostituting myself so I can return to Africa.

I tried to make an effort for my friend.

I said earlier that this week has been full of mixed emotions. This week was the funeral of a dear friend of 26 years. My best friend’s mother passed away suddenly while I was in Mozzibeak, I was asked to come back which of course I did without having to think about it. All I wanted to do was to be with and help my best friend and her family. The last couple of weeks I have tried to help with preparations for the funeral something I never done before. I have only ever been to two funerals both for close family, never for a friend. There is so much that needs to be arranged many things I had not thought about. I hope that in my own small way I did make things a little easier.

On the day of the funeral the sun shined, there were tears and smiles. This was a day of celebration of a friend who had made an impression on many lives. I don’t believe in religion, I don’t believe in heaven in the traditional scene. But I like to think that there is something after we depart this planet, I don’t know what that’s for far clever people to discuss and work out. All I know is my friend is at peace, a friends that was loved by her family and friends and is greatly missed by all.

My friend Joan, missed by all.

I said I didn’t have a lot to write about this week….. I lied.