Misfits Mid-Life Crisis Adventures in Tofo Mozambique and Nels (SA) (The NEXT Chapter). 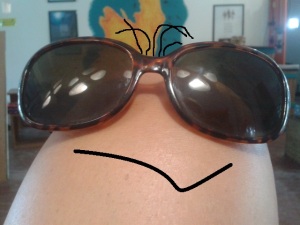 Portuguese word of the week: “Cerveja”, means Beer, emmm taste so good (with lemonade that is).

Saturday, the power died about 5am and came back after 11am and struggled for a few hours more. Late morning it was as if there was a tornado was passing by, the wind and rain was very heavy for a short period. A very quiet day, eating soup (do you eat or drink soup), reading and watching the gazillions of frogs running around. I have a horrible feeling that tomorrow there will be so many dead in the pool.

Saw this in a shop window.

Sunday, by the early afternoon I was resigned to the fact that Frida and I were going to have to take the cattle bus to Maputo. I was walking down the road to buy the tickets when Nadia started shouting at me to come back. What happened is that Nadia had looked on the net and seen that someone was travelling our way tomorrow. I managed to get hold of them by text, Frida and I have a lift to Maputo.

Frida one last run before she travels to Europe.  The tank we travelled in.

Monday, the drive to Maputo was lovely in an air conned tank the size of a large car. Our driver was an American called Troy who is travelling the world and runs a charity, sounds like a nice life. Dropped Frida off in the city, that’s when Troy and I had adventures to find the chappa station. In the end we haled a cab, Troy explained in Portuguese where I wanted to go. The chappa station it turns out was very near to the original location we thought. After waiting over an hour the chappa was off, I sat in the front and hoped that I got to SA in one piece. It took a while to get to Nels, a lot of stopping for no reason in my opinion on the MZ side. Walked to the B&B after that chappa dropped me off in Nels, I was sitting on my comfy bed at 1am.

Troy chatting with Maputo police, and explaining to the Taxi I wanted to get a Chappa.

Tuesday, went straight to the embassy with all my papers, handed them over and was told to come back tomorrow. I had to make a payment at a local bank and then bring the receipt back. Walking in the heat was really tiring, a number of people carry umbrellas I think I should buy one as well. Did some shopping then off to the cinema and saw a couple of films. My regular cab driver Sifiso drove me around many times over the next couple of days.

The chick I found in the kerb, and in the grass where I left it.

Wednesday, walking to the embassy, I found a little chick in the kerb. I couldn’t leave it in the road I had to move it to and carried it on to the grass verge. I really felt bad leaving it, I hope mum found it. Once at the embassy I was told to return tomorrow as the person who signs visas was not. I spent the rest of the day in the cinema; because of the exchange rate I can see films for just under £2, in the UK you’re looking at £10 or more. I mentioned the cutting of credits to a manager as its still happening.

I have an Emnotweni card after a year, just think of all the points I have missed out on.  The posh but empty Glass Bar.

Thursday, I picked up my visa, it’s a 3 month one not 6 as I had hoped but 3 is better than nothing. I will be going home end of May now, next week I need to make arrangement such as changing flights. Went to Mugg & Bean my normal table was taken I felt a little robbed. Spent the rest of another very hot South African day sitting in an air conditioned cinema watching new films. I complained twice about the credits being cut. The second time it was mentioned that the projectionists have been told, this means that there is an issue with the timing of the equipment. The manager said he will have to contact an office in London (England) I couldn’t believe that when he said that. Let’s see if next month the timing is better.

Friday, time to leave SA. But first I went to the cinema as I had the morning to waste. The Greyhound is advertised for 13.35, good thing I got there early as today it departed at 13.00. I travelled business class again and relaxed in my recliner chair. The border was busy it took time to get through the queues; it appears that everyone was trying to get back in to Mozziebeak at the same time as me. Once in Maptuo I walked to Fatima I used my trusty Google ™ map to made my way around the city. Maputo is busy crowed capital; however it’s also very dirty there is a lot of rubbish just thrown everywhere. Once at the backpackers I said hello to Danica who was there, unfortunately her car is full as a result I can’t have a lift tomorrow. I paid a lot of mets for my own room, I hate the dorms. The room had air-con and a loo with shower but I didn’t have a towel. The internet reception in the room was not great, but it meant I spent my evening and night nice and chilled on my own. 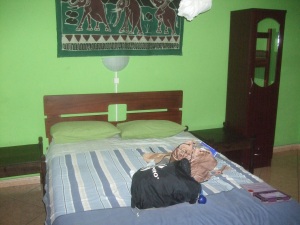 My room at Fatima in Maputo, The Elephant room (are they hinting on something)

Reading: “The Hitchhickers Guide To the Galaxy: So Long And Thanks For All The Fish”, by Douglas Adams, “Knit One, Kill Two”, by Maggie Sefton, “Morrissey List of the Lost”, by Morrissey and “A Game of Thrones, A Song of Ice and Fire” book 2 “ A Clash of Kings” by George R.R. Martin.