Portuguese word of the week: “Enxaqueca”, I hate “Migraines”…..

Saturday: Highlight of the day, I saw a Monkey in fact I saw it twice in the tree behind Liquid There used to be many Monkeys in the area, so I have been told but they were killed or driven out during the civil war. In 2014 Alice Cooper the Cat was seen chasing one down the road, I didn’t see this. This morning Miguel was looking out the back near the pool when he excitedly called me over, there was a Monkey on the wall. Of course by the time I arrived it had disappeared up the tree. I did in the end I did see the monkey twice, grey fur black face and large red balls (what a boy). All day I kept looking at the tree hoping to see that simian face again. Today had the highest temperature that I have seen over here 42c, a very hot humid day.

Picture of the week, Kalle and Admiro.  One of these people didn’t really want this pic to be taken…..

Sunday, sadly I found a dead Bat while doing my Toad/Frog watch when I opened up the dive centre. As soon as I took the filter cover off I immediately knew it was a Bat, how sad. I love to see a Bat and have fond memories of being buzzed by them in the early evening. The dive shop ran out of electric credit, I tried to buy from the market but the guy was not around. My boss was on a trip and had left his car. I found the keys totally by chance, but then discovered i couldn’t open it. In the end another colleague just turned the key and the door opened, I really felt stupid. In evening Miguel and I went for a few drinks at “Gato Laranja” spending time chatting about films. 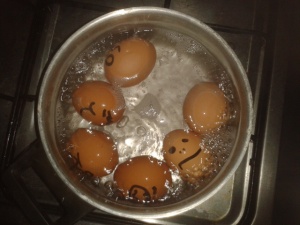 I’m nasty to what used to be “Happy Eggs”.

Monday, a day off, not feeling well. A day of rumbling thunderstorms, rain, Rusty visiting, power cuts and painting. Highlight was sleeping on the porch while it rained.

Rescuing very small Frogs is also what I do here.

Tuesday, A terrible night, horrible headaches. Had Rusty over, we went in the kitchen I heard a noise like sneezing I was about to say “bless you” to Rusty when I noticed a small white and ginger cat hissing. I of course rushed Rusty straight out, the cat disappeared. I don’t want to overly attract Cats because Rusty now comes in to the garden. Miguel later told me that when he went in first thing there were 3 or 4 small cats on the table.

Met a guy who was wearing a very old Liquid T-Shirt.

Wednesday: Still suffering from migraines, I popped in to Liquid had the best medicine ever porridge and coffee. Did a little shopping and visited the chemist. Have looked at a house on the Liquid road that has air con, Miguel and I might be moving. 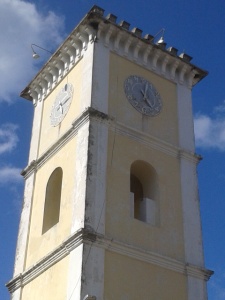 The big church in Inhambane, and an old one that says a different time on each clock face.

Thursday very early morning (it was still dark) I went in to the kitchen and ate cornflakes. Sitting inside the door was a small tabby cat; we just continued to look at each other. When it was time for me to leave it ran off in to the dark. Defiantly feeling better today the migraine appears to have travelled around to a different side of my head. I will be back at the dive shop tomorrow.

7am on the BIG bus, look over my left Shoulder, Mike (my Tofo son) is fast asleep.

Friday, I was on the big bus at 7am going to Inhambane. I met a friend who took me to Notariado (Notaries) where I got official papers stamped, this means that next week I can apply for a new visa. Because it was a government office I had to cover-up a little, not a lot of leg on show and shoulders covered. As soon as I could I changed back in to shorts and vest. After work Miguel and I went for a drink and chatted about “Life the Universe and Everything”. While walking home we just had to stop in the dark and look up at the stars. I saw a shooting star….. wow. 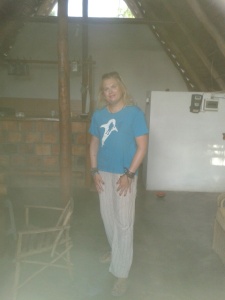 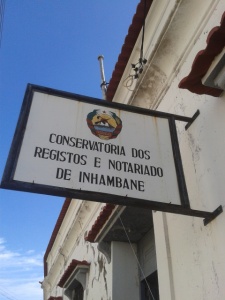 All dressed up to visit Notariado (Notaries).

In other news. I heard a child shouting, as I passed I saw a woman hitting the girl with a stick. I stood there and indicated not to hit the girl. The woman said/shouted something to me in Portuguese, certainly while I was around the girl was not hit again. I didn’t want to stroll in to the garden and actually intervene I didn’t think I could, maybe I should have. I saw a lot of government bureaucracy when I worked in the UK, I have now seen it first-hand here in Mozziebeak its not nice. Have paid someone in to do my washing and clean my hut.

When I wasn’t feeling well earlier in week, I was 2 fans Lucas.

Reading: “The Hitchhickers Guide To the Galaxy: The Restaurant At The End Of The Universe”, by Douglas Adams, “The Hitchhickers Guide To the Galaxy: The Life The Universe and Everything”, by Douglas Adams, “Knit One, Kill Two”, by Maggie Sefton, “Morrissey List of the Lost”, by Morrissey and “A Game of Thrones, A Song of Ice and Fire” book 2 “ A Clash of Kings” by George R.R. Martin.