My return to Mozziebeak starts on 12 September; this will be my third visit to this beautiful part of the world.  I have had problems with the Joberg to Inhambane section; I seem to remember that previously booking flights was not easy but I’m working on that.  I have flown on the same flight out of London twice before, that plane for me is the Tofo express.

I was lucky that when I returned to the UK in March I didn’t come back with much.  This means I don’t have a lot to take back; I am buying a few new things here and there but not a huge amount of stuff. 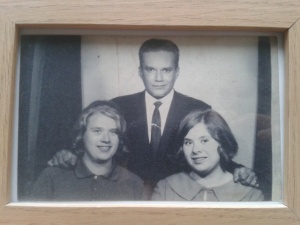 Mum at the weekend and with my dad and her sister Aunty jean in the early 60’s, picture taken in Streatham.

I am so excited about returning to Mozziebeak I never intended on staying in the UK for 6 months, but I had to.  My sister and her lovely family allowed me to stay at their beautiful home which I will never fully be able to thank them for.  I managed to get a full time temping job after a couple of weeks of watching “Top Gear” during the day on “Dave”.  I get a good wage, a lot better than if I was working in a shop, but  the amount of money I take each week is not as much as it originally seemed after the agency and the company that do that tax and stuff like that take their share.  I have been saving as much as possible, I have really only been spending when I have had to. 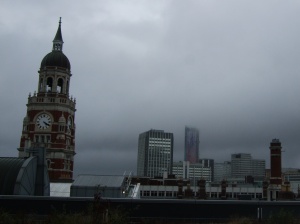 When this blog is published I will have 10 days left sitting in an office in Croydon.  The job stinks but it’s a means to an end, it’s this office that’s allowing me to arrange my trip back to Tofo.  I will miss a number of the people I see Monday to Friday and I hope that I will be able to keep in touch with them.  Life is full of experiences and Croydon has been an unexpected one these this last 6 months. 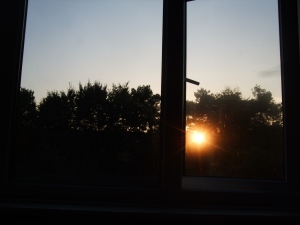 Sun setting as I was doing more painting, 8 pictures completes.  Have started on 4 more.

When I left Sutton Council end of May 2014 I thought I would ever need any Council Tax knowledge again, so I made an effort forget everything.   I imagined it being vented it out of an airlock, a little like Ripley sucking the alien out of the Nostromo shuttle at the end of “Alien”.  Luckily a small amount of knowledge must have clung on and was allowed to fester into a full blown Council Tax monster.  But I’m glad that some CT legislation stayed in the dusty recesses my mind as I haven’t had to relearn much.  I just unpacked the Council Tax crap from the cobwebby corner of my mind.  This time I will carefully pack it up in bubble wrap just in case I need it again in the future, I have to admit I hope I never need it again but it’s good to know that the knowledge is there somewhere.  I hope that the dive knowledge that I also have stored in my mind will have been just as well looked after, all I need to do is open the memory boxes and jump in the water. 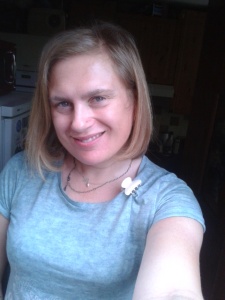 When I finish the office job on 31 Aug I will have a number of days to sort out my life before I leave.  One thing I really need to do is to sort out a few things from the sic-fi shit in storage and see if I can sell them.  I am going through the list and pulling out odds and ends to see if people might want them.

Cycling home I had to stop when I saw this.

I really hope that I can stay in Tofo longer this time; there are a number of people that I have met there that have lived there years.  I will have to talk to them and get advice on how I can become a real Tofoite. 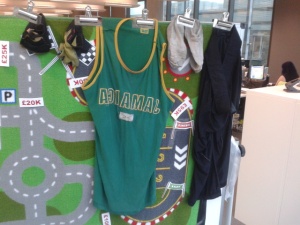 View from the bar.  And very wet cycling stuff hanging up at work.

As well as sorting out my life when I finish work, I hope to meet up with a few people just to say “so long for now”.  My little niece is already excited about Skyping with me like we did before, I can show her round my new home and introduce her to a few of Tofo’s 4 legged friends roaming around. 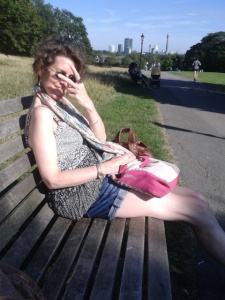 MOZ is asking for a fee for photo’s now, she’s getting an agent.

Celeb spotting of the week, Richard Osman and Julie Hesmondhalgh (both at St Pancreas, not at the same time)

In other news this week.  Went to Northamptonshire to visit family and friends, had a lovely 72hours away from the big smoke of city, got my hair cut.  A nice piece of graffiti in Croydon has been wiped; it was of a naked female body and was there for only a month.  Had a messy Porridge explosion in my bag one morning.  Met MOZ for a Starbucks and a chinwag.  A man in front of me was masticating very nosily on a train; it really was not a pleasant site. Cycling in rain and more painting. 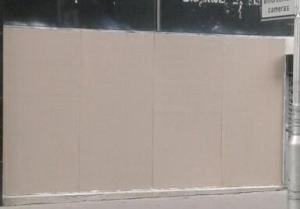 One morning it was there, by the afternoon it was gone.  A pity I liked it.