Posted on February 3, 2017 by misfitscully 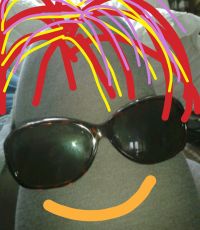 I spent the start of this week in Surrey where it just rained and rained, I walked around feeling damp starting to suffer from foot rot, making splish splash sounds every time I take a step.  I might suggest to my sister that she build an ark in the garden.

The high street had not been washed away by days of rain at this point.

I’m still not feeling well, when I start coughing I can cough for quite a long time.  There are times when I sound like a deer during rutting season, I open my mouth and this horrible guttural sound emerges.  Feeling a little low I decided to “live life” and go see T2 Trainspotting, the original film is very special to me, what an amazing soundtrack.  I was concerned about another after 20 years did the world need a new slice of Renton and Co.

Should i be worried that i got three skulls in my change.

Going to the cinema is such a joyful experience, but this time I felt a little stressed due to this cough.  I say this as I find it annoying if people are disruptive during a screening.  There are 3 different degrees of cinema annoyance in my opinion.  The worst offenders I call a Category A, who are people who find that they have to carry on that extremely important phone call or worse there conversation with the friend sitting next to them.  Category B offenders are people who eat noisily, popcorn opening sweets or sucking hard on a drink.  And finally the Category C people who are ill and cough. 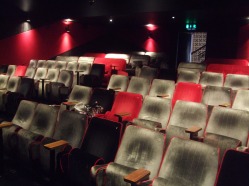 Whats better than seeing a film in a big room on a large screen.

It was about 30 to 40 mins into the film which when I started to feel myself get hot and bothered.  The coughing started and decided to carry on trying to drown out the excellent foot tapping leg shaking soundtrack.  This screening was just after noon, my thinking was that surly there won’t be many other saddo wanting to sit in a large dark room.  I was wrong, I hadn’t factored in the continual rain so there were a lot more patrons than I expected. Sitting there coughing I couldn’t concentrate on what Begbie and friends we’re doing or saying.  Even though this is a Category C offence I didn’t want to annoy others, because it would be grating on me I can assure you.  Without thinking I gathered up my bags, held my breath as I left the screen I did this s that I didn’t cough as I passed others concentrating on what Spud was doing in front of them. 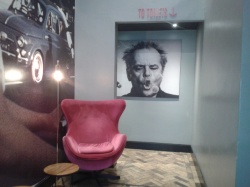 Jack watched over me as i sat in the Big Brother style chair coughing.

Outside the screen I sat in the hallway by the loos feeling really frakked off while continuing to cough for over 5 mins.  At one point a member of staff looked over the banister looking down at me and asked “if I was ok”.  It was at this point while putting on my coat because I had decided to leave; I discovered I couldn’t find my cheap headphones.  It wasn’t the fact they were cheap that was annoying it was that I had only owned them 3 days.  I must have dropped them when grabbing my bags in the dark.

While all of this was happening I became aware that the “cough rate”, my newly patented scientific way of judging the gap between chest spasms was getting longer.  Could I go back in, could I find my headphones in the dark?  Once back in my seat I groped around the sticky carpet but found nothing.  1 minute became 5 which became 10 and eventually the end credits rolled, I saw the rest of the film.  All the way through the rest of Danny Boyle beautiful film I was on cough alert ready to grab my bags and leave without notice.  When I walked out of the Small local indie cinema I had a huge smile on my face, not just because I really enjoyed the film but because I made it to the end.  I of course will have to re-watch it as there is a missing period of about 10 minutes, so I can’t really say I experienced the full cinematic experience.  I should say that when the house lights came up I did find my headphones, so it was a win win situation all round. 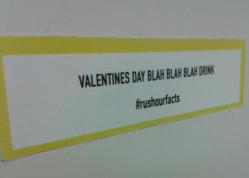 Seen on a Tube train, my feelings exactly.

I did ring the doctors but I think he had better things to be doing such as counting the small wooden sticks he uses when he asks a patient to “open wide and say ahhhhhh”. Until then I will have to continue to “live life” while coughing……..

That’s where the bus landed.

This week a train nearly went over a bus….. don’t panic it’s not as bad as it sounds.  After taking my nephew over a local level crossing, it became apparent that he had dropped his little bus that he carries everywhere.  This had landed in the grove that the train wheel goes through.  The bus was rescued, my nephew was happy, for a couple of minutes I was his hero. 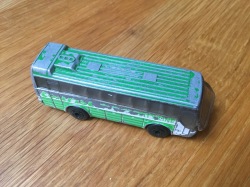