Portuguese word of the week: “Cinema”, emmm as in Cinema….

Saturday: got a shock when I found out my Happi balance is about 2500mets, oops I have to be more selective and mainly have porridge and soup. Went North again to “Office” there was a large swell, which meant it took longer to get there and back. The visibility was amazing; saw a Jenkins Ray, and 2 Devil Rays but no sharks. In the afternoon went to “Giants” once again wonderful viz, apart from big eye trevally and barracuda didn’t see much. I popped in to “Mr Fresh”, when I was paying I was asked to pay the money to a couple of children who were topping up there pre-paid card (a lot of locals have simple bank accounts with a pre-paid card that they can use). The man behind the counter asked me to do this, I gave them money and walked out with my goods. I really don’t know what happened there.

Chatting with my little friends.

Sunday, went on a very early Ocean Safari with 2 lovely Chinese women who were terrified, they couldn’t swim and gripped on to the ropes all the time. It was when we encountered a huge pod of Dolphins that they relaxed. I had them in life jackets and sat next to them. Every time Fanni, JJ or Tim went in to snorkel with the dolphins the women tensed up and relaxed when they climbed back in the boat. In the afternoon I had a new tattoo of R2D2 and BB-8 from Star Wars, Kalle did it for me while we listened to classic Britpop. Will have to be out of the water for a while and wear t-shirts while it’s healing. 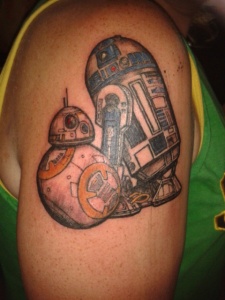 This represents the old and new in Star Wars.

Monday, my day off. Slept in late, had Rusty over which was lovely. Popped in to Liquid for some soup from Happi and did shopping a lazy day. The new tatt is looking good. 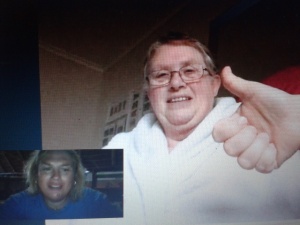 Mums not sure about the new tatt, Helen gave it the thumbs up.

Tuesday, I had a terrible night couldn’t sleep. I was standing looking up at the stars eating cheap baked beans at 1am. Spent time chatting with a woman who dived with us and lives on the Comoro islands, sounds like a lovely place. Another power cut this evening that lasted a number of hours, I couldn’t be bothered to stay up so got under my net listened to music and read. I had planned to stay up late as I’m visa running tomorrow, but after last night’s lack of sleep I was tired.

It looks pretty, but on a hot night i’d rather of had the fan on.

Wednesday, Got picked up by Mike around 6.30am, good thing I had spelt as I drove the Inhambane to Xia Xia section which took about 4 hours. Once near Maputo we took a detour to bypass the city. The new ring road built by the Chinese is impressive but not finished, the road just end. We followed everyone else on to dirt road past small houses, as people were putting up there washing. This detour didn’t last long one, once the ring road is complete it will make the journey so much easier. The border was quick and easy, I did have a niggle in the back of my mind as 30 days ran out on Tuesday, it didn’t get noticed, phew. Arrived at Mamma Mia amount 11pm, good to be back in Nels. 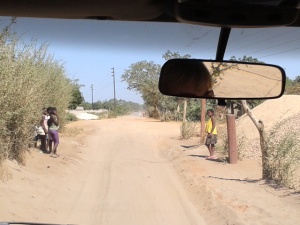 Thursday, Cinema day. My regular cab driver drove me around a couple of times, does he ever sleep. The staff at the cinema recognise me and asked how many films I was seeing. Originally it was 4 but I changed the times which resulted in only 3 films being seen. The first 2 films had there credits cut, which stresses me. During the 3rd film “The Hateful Eight” I could feel myself tensing up. There was about a minute to go when the sound stopped but the picture remained. I actually looked back I was the only person in the cinema and shouted for the sound to be turned up. The sound didn’t returned, I sat there determined to watch everything. Did a little shopping during the day everything was done in the one shopping centre.

Friday, went to have an X-Ray on my left foot, I had to see a Dr first then had the actual X-Ray, followed by seeing the Dr again. This cost me about 800 Rand, the Dr didn’t actually examine me she just looked at my foot from a distance. I was informed that there was nothing broken or fractured; the Dr couldn’t explain why one toe is a little out of place. For a price of course it could be straightened, I will have to have it looked at in the future. After some more shopping I made it back to the cinema and saw 2 more films. I spoke to the manager about the cutting of credits, “Marvels, Deadpool” would deffo have a post credit scene and I didn’t want to miss it. He said that they shouldn’t ever cut the films, I pointed out it happens all the time. After enjoying a great adult humoured superhero film I lightly gripped my seat with anticipation as the credits rolled. I saw the post credit scene and laughed like a drain, I was a happy geek travelling home in another cab.

Its 23 Rand to the pound while I was away.

In other news, met a little boy who had 6 fingers and toes on his right side. Skyped with SAZ and the kids at mums, then with Hel and mum the next night. Saw a poor white Rabbit being held up by a child by the side of the road. Enjoyed a lovely thunder and lightning stormed as I arrived at Nels.

My first room (more about that next week) and a friendly animatronic dino by the cinema who I wanted to take home.

Reading: “The Hitchhickers Guide To the Galaxy: The Restaurant At The End Of The Universe”, by Douglas Adams, “Knit One, Kill Two”, by Maggie Sefton, “Morrissey List of the Lost”, by Morrissey and “A Game of Thrones, A Song of Ice and Fire” book 2 “ A Clash of Kings” by George R.R. Martin.