Portuguese word of the week: “Trovao”, which means “Thunder”, we had a lot of Thor throwing his hammer around the sky this week.

Saturday: Yes it’s cheeky but I had a day off, because we got home so late last night I needed to rest.  It was my weekly Branco’s with Patrick, Michael Moye also joined today..  Had a very interesting chat with a man I have met before but don’t really know about Zimbabwe a place I would like to visit.  All my worldly belongings are in Patricks hut because I’m technically homeless.  I stayed the night at his.

Sunday, During most of the day we have had thunder rumbling nearer and nearer it’s been very hot today.  Towards the end of the day it started to rain.  And in the rain we walked home, we came up the dunes a little early which meant that we had to walk a little further than expected in the rain I was getting a little grumpy I admit.  Went to Chris house to meet his cats and see the home I’m moving in to for a few weeks. 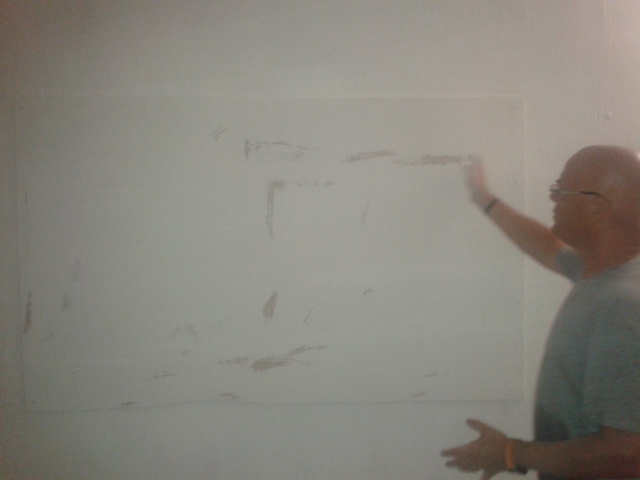 Patrick explaining by his conctoimconcetp for lonely people.

Monday, another very rainy, windy, thunder and lighten sort of day. Because of the rain and due to our location by an old lagoon we were infested with small flying insects, everyone was complaining.  In the afternoon the conditions got better which meant we could launch on a hastily arranged double tank to “Sherwood Forest” and “Salon”.   A large grouper was seen on “Sherwood”, but the treat was on “Salon” an Octo going about his afternoon.  After work I moved to Chris house, I’m not there my own a friend of his is also helping to look after the cats.

Laranja, resting after a busy day.

Tuesday, Still very European weather.  Been working on the beach sign, its taking time due to other things happening. I have been making stencils out of masking tape so much quicker than last year’s cutting out letters on paper and sticking them on to the sign. This afternoon I lead a dive to “Giants”, we had a Small Eye Stingray and 2 Turtles what away to end the working day.

Wednesday: This is officially the rainy season, but from memory we didn’t have much last year.  I went on three dives today two to “Giants” and one to “Clownfish”.  The first “Giants” didn’t go quite to plan as the customer had a few issues with getting down to depth.  Mike, Viivi and I just hung about on the reef for a while.  The second dive was much better, the recent bad weather has helped clear the viz.  Once on dry land I thought I would get out of the wetsuit, no I was needed for another dive to “Clownfish”.  I really did try to get back to the to the buoy line that I had set at the start of the dive.  I didn’t make it I’m getting closer each time but that’s no excuse.  Denise my flatmate at Chris house made a great meal a huge salad. 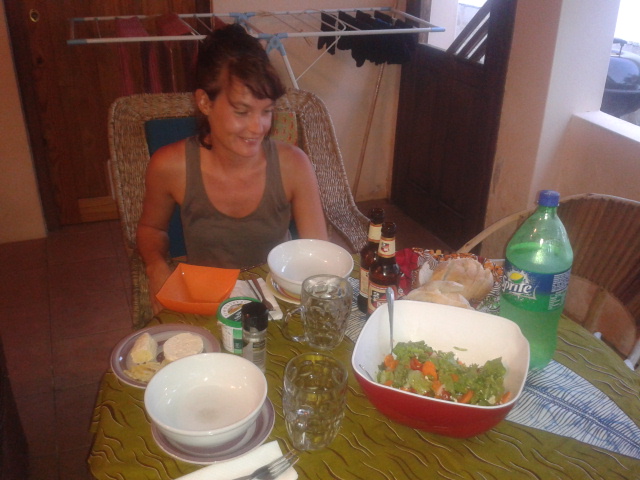 A lovely meal at the end of a busy day diving.

Thursday; another day consisting of three dives, for the first time since I returned I went north to “Office” and “Reggies” it takes about 30 mins to reach these dive sites by boat.  Once again the viz at depth was breath taking.  The only big things seen at “Office” were a couple of lager Groupers.  Once on the surface everyone settled down with hats sun cream and relaxed for the surface interval of an hour and a half.  I actually fell asleep in a puddle during the surface interval..  At “Reggies” had 2 white tip reef sharks and a Jenkins ray.  Back on dry land I kitted up for the third dive of the day to “Salon” in which I took a group of 6 diving.  The high light were a number of Octos, one was having an argument with a lion fish. I was so happy to get out of my wetsuit as I had been wearing it all day. 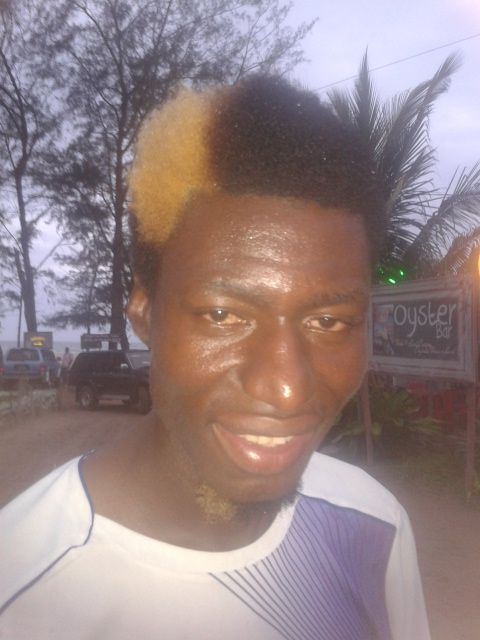 Liking what Nelson has done to his hair.

Friday, the sun is back in full force summer has returned.  I went on another double take this time south.  “Hogwarts” didn’t produce anything but “Manta Reef” lived up to its name.  We saw a Reef Manta only briefly but we saw it, that’s the first Manta I have seen since I got back. Tonight there has been a water problem at Chris place we had to text him in Germany for instructions, its looking like all has been sorted.  The cats I am looking after are starting to trust me and let my hand stroke them.  I am so tired after the number of double tanks I have done this week; honestly I’m not complaining anything is better than Croydon Council

The Viking will be missed a lot.

In other news this week, liquid lost Viktor the Viking, Sazzle and Joonas (he is back in Feb next yr), still very sad to see such nice people I have got to know and dive with leave.  I made a donation to a good cause, it’s only a few pound but if it makes the person’s life better then that’s a good thing.  Tofo is getting busier the silly season has commence how do I know, the jet skis are on the water and there are lots more large 4x4s in town.  Henrick on of the bosses boys watched new Doctor Who with Patrick and I think he enjoyed it. 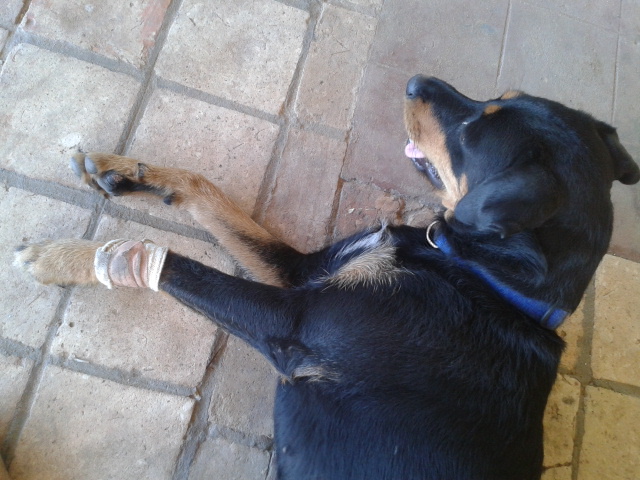 Poor Mia has a bandaged ankle and a very swollen paw, such a friendly dog..

Reading: “Knit One, Kill Two”, by Maggie Sefton, “Morrissey List of the Lost”, by Morrissey and “A Game of Thrones, A Song of Ice and Fire” book 2 “ A Clash of Kings” by George R.R. Martin.