Portuguese word of the week: “Abelha”, Bee, as in Bumble Bee.

Saturday a Turtletastic day. Lead a dive to one of my fave sites “Mikes Cupboard”, where we had 2 Turtles. One took a look at us and made its way to the surface. The other was larger and chilled at depth. Later I swept for Chris on “Clownfish” where there was another Turtle just making itself comfortable in its hidey hole on the reef. We had rumbles of thunder most of the morning and a little rain. Oh it’s my mums b’day today.

Sunday, really nothing happened. A shop day, helped dives go out and come back in. It’s been mentioned to me that were getting a fridge tomorrow and a housekeeper who will tidy up and do the washing. There are other people in the next hut now, they have a dog but there not noisy at all. 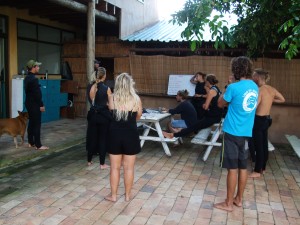 Preparing for a Dive.

Monday: The last few days I have been lucky to be driving one of the bosses cars, just from home to work, I could get used to this. Went on a mini road trip drove a number of the dive shop guys to the petrol station then to the supermarket, I felt like a parent taking the children out for the day. At the petrol station I saw the ginger kitty again, this time it was lounging on the counter only in Mozziebeak would you see that. The new housekeeper has been but the washing was just shoved in a draw. 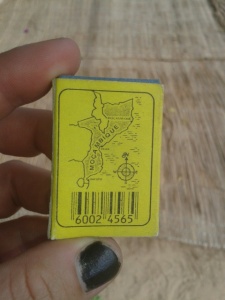 Just in case you don’t know where I am.

Tuesday: I was in the shop, Tofo is quiet, at one point I was reading and realised that my eyes were getting heavy so up and about I got I must have looked very fidgety just keeping awake. There have been reports of a couple of shark attacks in the area the fisherman are wanting a cull which really wouldn’t help the situ. Rusty stayed the night at mine. Viktor and Liz helped coax him in to the car with bread. Once home I met the neighbour’s cute black lab called Kiwi. Rusty was tired after a busy day at the dive shop being loved and fussed by everyone.

Sarah, Liz, Carlo and Viktor mapping for there Divemaster, all were trying to out do each other. Rusty in the car after being bribed with bread.

Wednesday. After kitting up for a dive to “Marble Arch” I got stung on the forehead by a bee or a wasp. We have a lot of Wasps around and the Bees are huge compared to their UK cuz. It’s funny as I’m reading a sci-fi book about Bees and I was always telling my niece how important they are and they don’t want to hurt you. That’s why I suspect it was a wasp. But I am the dive professional and off to “Marble” we went, much better viz then recently. Once on the surface everyone was really happy about what we saw. 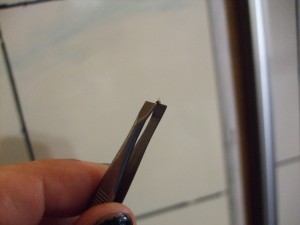 The Wasp/Been sting pulled out of my forehead.

Thursday, Went on a beautiful dive to “Clownfish”, you could see the reef from the surface the water really was crystal clear. After the dive I went home and looked up at the clouds as the sun was going down. I decided to go to the beach which is about 90 seconds from where I live. It was just me and a random dog. I am on the beach and in the sea for diving but I never really just go there for pleasure, I spent time paddling and watching the clouds and the sky turn darker. After I took my washing to Chris as his housekeeper is going to do my washing me.

Friday, went to “Salon”, lead a customer round what was probably my best “Salon” dive ever. We didn’t see anything especially amazing just lots of small things, shrimp, nudies, lobsters, Trumpet fish. But it was the fact that the customer was as excited as I am about seeing these amazing creatures. Suunto the puppy went missing today, we all searched Tofo for him. I put out an alert on the local FB page. As I was about to drive home Joonas came up to me and said that he has been found. We drove to a very secluded area and found him living a five star life in a beach house pool being fed and called Bruce. It appears he just wondered off and followed a group back to their place. After playing hide and seek we got him in the car. All’s well that ends well.

Suunto (or Bruce) who was living the Five Star life for a few hours near this secluded beach.

In other news: DMT Liz has a very small cute kitten. Drove to the petrol station and came back with 225 litres of fuel for the boat, could really feel how heavy the car was. Discovered a great tasting local yogurt, can’t help myself from buying and pouring over cereal. Have been shown a website that I can watch new Doctor Who on, very excited. Hopefully have ordered mats for the dive shop from a man down the road, fingers crossed. A couple have come to dive that were with us a year ago, they saw Nadia, Chris and my pics on the website and have returned. Joonas dreamed me and him were using our diving BCD to fly.

Big fancy dress party tonight.  \cartlo made a ball and I painted Wilson from Castaway on the front.

Reading:” The Bees”, by Laline Paull, “Knit One, Kill Two”, by Maggie Sefton, “Morrissey List of the Lost”, by Morrissey and “A Game of Thrones, A Song of Ice and Fire” book 2 “ A Clash of Kings” by George R.R. Martin.